Before seeing the Suicide Girls Blackheart Burlesque, I had never before been to a burlesque show. So when Ryan asked if I wanted to go with his friend and girlfriend, I was a little hesitant, and didn’t know what to expect. Needless to say, this wasn’t your typical burlesque show, and it was awesome.

First and foremost, the girls putting on the show, the Suicide Girls, are very unique girls. They are tattooed up, have pink/blue/green/purple hair, have piercings, and are awesome. Another thing I enjoyed was that they were all different body types, which made my self-esteem go way up. Girl power, yeah! 😉

The show was at Union Transfer, which in and of itself is an awesome venue. It has a very cozy feel to it. After we got some drinks at the bar, we set up shop in one of their balconies, and waited for the show to begin.

After an opening act of a local Philly group, Thunder Snow Cone, (where girls were fitting themselves through tennis rackets, and bouncing around naked on glass), the main act began.

Let me tell you, it was so much better than expected. I am a total geek at heart. I grew up playing video games, watching movies, and catching Sailor Moon every morning at 6am before heading to school. So when the girls started dancing to “Legend of Zelda” (dressed up as Link), “Sailor Moon”, “Beetlejuice”,  and “Star Wars”, I was right at home. I think I was even more excited than the boyfriend was. I mean, wearing storm trooper helmets and lingerie?! Dancing to Adventure Time? Singing songs about the Little Mermaid and Harry Potter? Who thinks of this?! Genius.

The show was great, the girls were gorgeous, the acts were entertaining… I highly recommend going next time they’re in town (most likely next year- they start their South America tour in January). 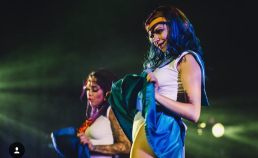