On Sunday June 26, 2016 two thousand people showed up to Xfinity Live for the 6th Annual Philly Burger Brawl. This year’s festivities also included 2 new segments: the Taco Takedown and Cutthroat Cocktail Competition. This year’s event showcased about 30 burger competitors, 11 taco competitors and 12 cocktail competitors. Burger and taco competitors were set up grilling and preparing in tents around the exterior of Xfinity Live. Participants enjoyed endless samples of food, as well as liquor of Jim Bean and Effen Vodka. Every participant received 2 chips from Sugarhouse Casino to vote for their favorite burger and taco participants. Every GA ticket also received one alcoholic beverage and VIP entrants enjoyed early admission and open bar 3-7pm.

The Burger Brawl was created by Rouge owner Rob Wasserman and his wife, Maggie, is a partner with the Fund for the School District of Philadelphia, the Olitsky Family Foundation, AIM Academy (Academy in Manayunk), and the Philadelphia School District to run a four-year pilot program for two city schools to utilize technology to increase literacy for elementary school-age children. A portion of the proceeds go to Compete 360, an organization founded by Maddox to support the education and development of urban youth. 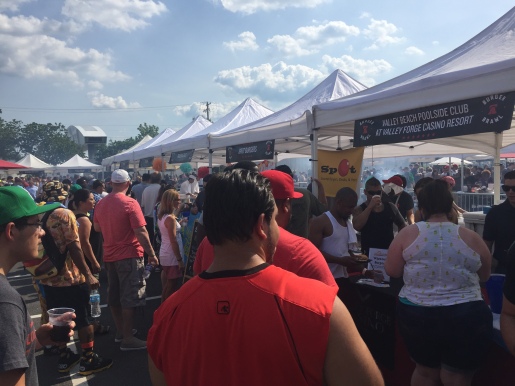 The competition heated up as the judges and participants enjoyed the food. In the center boxing ring the Cutthroat Cocktail Competition took place pinning chefs, bartenders, and restaurateurs head to head mixing a drink in under 7 minutes and incorporating a secret ingredient. 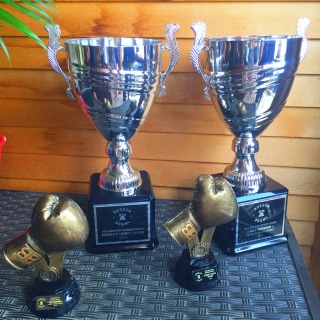 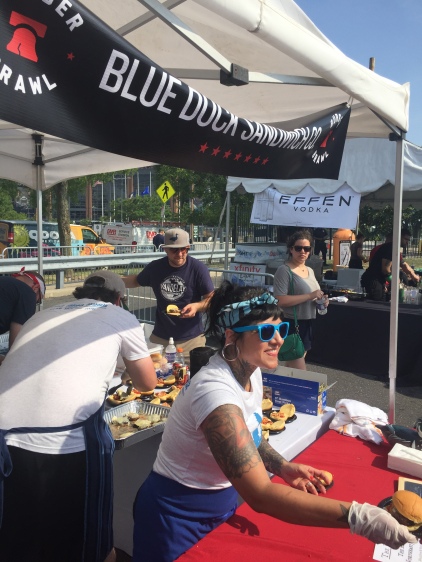 When it came time to declare a winner, the crowd hushed in anticipation. The winner of the Cutthroat Cocktail Competition were announced first. 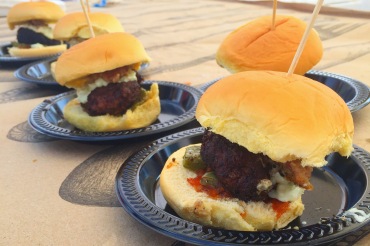 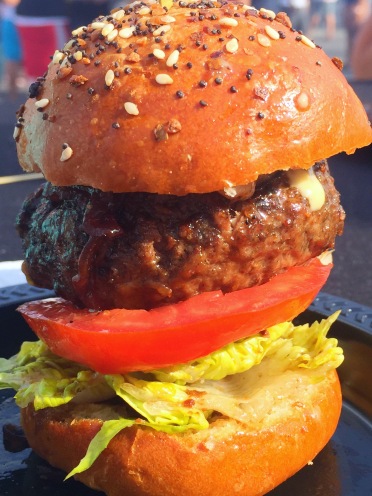 As for the Philly Burger Brawl winners, The Million $ Bacon Burger from Pineville Tavern in Bucks County was the judge’s choice for 1st place, while the Peanut Butter & Bacon Burger from Lucky’s Last Chance in Manayunk won for People’s Choice (after a recent win in 2013).

Chef Anthony Pasceri from Pineville Tavern makes the Million $ Bacon Burger from ground chuck, rib, and brisket, and builds it on a potato roll from Conshohocken Bakery. It is topped with Cooper Sharp American cheese, bacon-onion jam, and bacon made of cold-smoked belly that is then sliced with Aleppo pepper, cayenne, and brown sugar before it is hot-smoked for eight hours. This burger sells for $15 with fries and coleslaw.

SPECIAL: On Friday, July 1, the Million $ Bacon Burger will be sold for only $5 at Pineville Tavern- get it while they last!

Manayunk’s Sandra Barnes created the Peanut Butter & Bacon Burger and former chef Pat Brady brought it to life. Lucky’s Last Chance builds its burger on a toasted Liscio’s roll, the patty is made with a house blend beef from Carl Venezia in Plymouth Meeting. The shock factor comes from the fact that this burger is topped with peanut butter, bacon, and American cheese and is served with a side of house-made grape jelly. It sells for $9.50-$11. 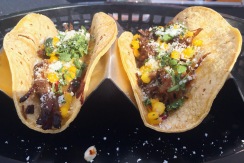 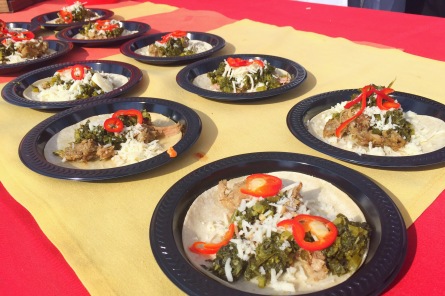 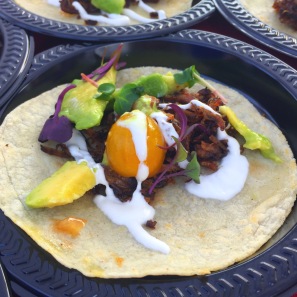 Personally we were most excited for the Taco Takedown because it was easier to try all the samples then to attempt to have a bite of the 30 burger competitors. Plus, who doesn’t love all the variety you can find in creating tacos?

Paul Lyons, chef de cuisine at Lolita, made his chorizo with pork butt, cheek, and belly. Cumin, coriander, smoked pimenton, and garlic where added. The taco was topped with salsa aguacate, queso fresco, pico de gallo, and pickled onion, and served on a corn tortilla.

For the Chino-Latino Taco El Pastor, El Vez executive chef Reinaldo Alfonso, used pork marinated in a traditional pastor with added soy sauce, Korean chili paste, and pickled pineapple that was deglazed with mezcal. It was served on a white corn tortilla with a fermented kimchee (fermented over two weeks with radishes, cabbage, anchovies, fish sauce, onions and more), and the surprise was underneath a layer of crushed Fritos.

SPECIAL: The Chino-Latino Taco El Pastor Taco will be on special at El Vez this week: 3 tacos for $11.

We cannot believe how delicious and full the day’s events left us. This event is a MUST for any and all foodies. If you missed the Philly Burger Brawl and Taco Takedown this year, be sure to keep an eye out for tickets next summer so that you can join us in enjoying some of the most creative dishes from the best restaurants in the Philadelphia area.