With 40 beers on tap and a menu of Irish-Polish inspired foods that pair well with beer, its no wonder that Irish Pol is one of the neighborhood favorites. Since opening in 2008, the restaurant has moved to their beautiful new location at 114 Market Street, Old City. Irish Pol has surpassed its reputation as a dive bar know for its wings. This brand new location can hold up to 150 people for private events on the second floor, main bar, and lower level bar  called The Barrel Room dedicated to whiskey and bourbons. Digital menu boards over the main bar display automatic update for kegs via a digital pour app. 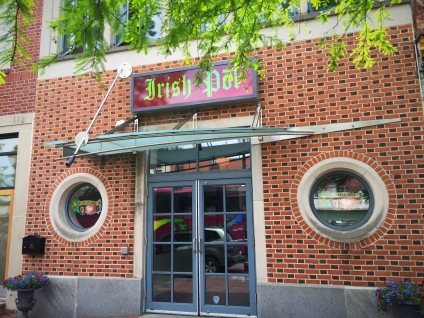 The restaurant owner, Darin grew up in Sea Isle City, NJ. The O’Donnell family was no stranger to the restaurant industry. His parents owned a pizza spot for 13 years and his brother is a chef. Darin started washing dishes in his parents restaurant for $3/hour and now he runs Irish Pol, a bar with an unforgettable name. Although sometimes asked if his restaurant is a strip club, Darin cracks a smile and explains the name comes from his Irish and Polish background.

Whether its whiskey and bourbon downstairs in The Barrel Room or craft beer, Guinness and Carlsberg upstairs at the bar, Irish Pol has got you covered. The bartenders are exactly what you’d expect from your neighborhood spot, warm and friendly. The atmosphere itself is a dark and cozy. What is so great about Irish Pol, besides the variety of beer options is clearly the food. Chef Matt has designed the menu with Russian, Ukranian, and Eastern European influences. He refers to the cuisine as elevated bar food, almost like an unexpected gastropub.

The menu showcases some of you classic Polish dishes like homemade Pierogies made with cheddar cheese. The Irish Pol Burger is even served with carmalized onion and pierogie on top! Beer influenced dishes like homemade Beer Pretzel Bites made with Yard’s spent grain from Brawler in the dough and homemade beer mustard and IPA cheese sauce were really great. Originally known for their Hot Mustard Wings, they’ve also got buttermilk soaked wings in flavors like Buffalo Sweet and Sour Wasabi. Other favorites like Kielbasa with sauerkraut or Hushpuppies are also included.

One of our favorite bites were the Drunken Chicken Sliders. These pulled chicken sliders and burgers are served on soft and buttery brioche rolls. We couldn’t get enough of these guys- they’re a great option for when you aren’t feeling man enough to conquer a monster burger but still want to avoid drinking on an empty stomach.

And you can’t drink a beer without thinking about bacon so they’ve got a Pork Belly Grilled Cheese and we tried the Hog Burger – complete with double smoked thick cut bacon, braised pork belly, cheddar cheese, and bacon mayo. Grab a side of the Guinness Bacon Cheese Fries and you’ll be down for the count after this over the top meal sure to cure any hangover or sober you up after all those double IPAs.

And you’d never expect it, but they’ve got vegan options too! How about some Pulled Mushroom Sliders with homemade vegan BBQ sauce made with sweet and smokey onions paired with a fresh slaw. Smoked Vegetable Hummus is also a delicious gluten-free option for diners. Gluten-free ciders and beers are sold by the bottle. 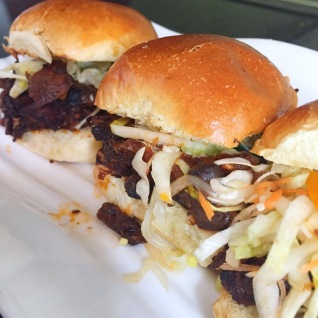 And look out for all the specials to be featured like themed beer dinners where every course is incorporated with Guinness night had a beer in each course, dessert specials like Fried Beer Pudding or Cookies with beer semifreddo filling, or “Bacon Night” with 9-10 menu items showcasing the delicious salty pork. Don’t forget late night brunch the 2nd Tuesday of the month from 5-10 pm offering beer-infused pancakes, housemade Canadian bacon, and beer poached eggs. Happy hour is EVERYDAY 5-7 pm with $3 beers and shots. Stop by soon, the kitchen is open till 1 am and the bar is open Monday, Tuesday 3 pm- 12 am, Wednesday-Sunday 12 pm- 2 am.

Cover photo from Upcomingevents.com. Additional images via Yelp. We would like to thank Darin for hosting us at Irish Pol.