The start of rarest. began with Anthony Marini winning the 2nd season of CNBC’s Restaurant Start Up. The Philadelphia restaurant concept opened in November 2016 inside the aka at Washington Square) serving guests a modern, seasonal american menu which focuses on tartares, crudos, ceviches, and charcuterie. Marini’s winning vision was simple: a restaurant, called The Rarest, which focuses on raw or lightly cooked food. But now, the concept has since evolved into so much more.

As a Philadelphia native, Anthony Marini graduated from the Culinary Institute of America in Hyde Park, New York. His formal career began in his hometown working in the kitchens of Dilullo Centro and the Germantown Cricket Club.  Marini has also led kitchens as Executive Chef at Philadelphia Fish & Company in Philadelphia, Christopher’s in Phoenix, AZ and the Standard Hotel in West Hollywood, CA.

In 2003, after relocating to Alabama, Anthony introduced Birmingham to his eclectic cuisine with AMBA, as Executive Chef and Partner. AMBA received strong local recognition. Then Marsini opened (local) restaurant and cocktail bar in 2005. The restaurant won “Best New Restaurant”. Marini was voted one of the “Top Three Chefs” and (local) was voted one of the “Top Three Restaurants” in subsequent years also. (local) garnered outstanding reviews from Birmingham Magazine, The Birmingham News, Portico Magazine and was featured in Bon Appetit, Cooking with Paula Deen and The New York Times.

On January 20, 2015, Marini competed in season 2 of the hit CNBC network show Restaurant Startup.  He pitched a restaurant he wanted to open in his hometown of Philadelphia. The show profiled Marini (nicknamed “The Comeback Cook”), and his 30 year friendship with his teammate and the custody battle that led him to abandon his business in Alabama. They ultimately won an initial investment from restaurateur and host, Joe Bastianich, beating out the #1 food truck in Atlanta, GA. Soon after, he partnered with Stephen and Tom Finley of Finley Catering to bring the restaurant to 834 Chestnut Street.

The restaurant decor was curated by Marini along with the direction of Morris Clarke of DAS Architects. The Rarest’s decor is sleek and stylish, full of concrete, wood, brown leather and modern art (many of which was inspired by Marini’s personal life, or created by Marini himself!). 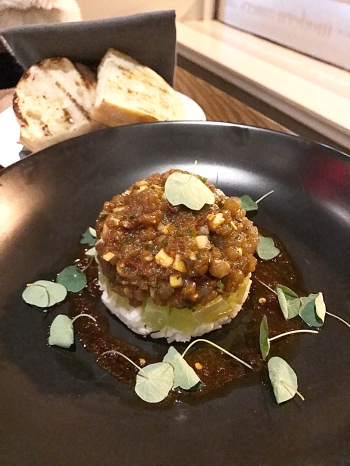 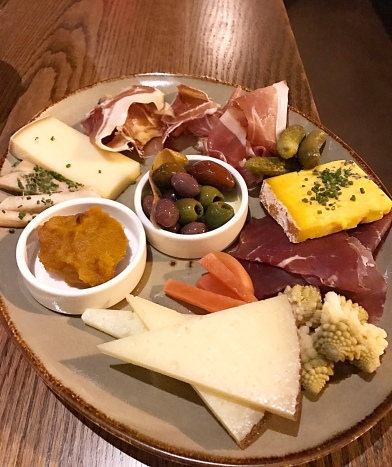 The restaurant menu reads in sections entitled “To Share”, “Raw”, “The Variety,” “Pastas and Grains” and “Daily Requirements” (larger plates). We began with the Selection of Meats and Cheeses (To Share) with chef’s pickles. The meat selection on our board included Speck from Italy, Jamon Serrano from Spain, Wagyu Bresola from 1732 meats in PA. The cheeses were Manchego from Spain, Shropshire Blue from England, and Von Trapp Oma from VT. This was by far one of the best charcuterie courses we’ve enjoyed thus far in the city. And we could not neglect sampling from the Raw section, we tried the Tuna Tartare with soy-sesame-chili marcona almonds, compressed cucumber, sushi rice, and taro chips. Otherwise the most popular plate is the Hanger Steak Tartare with red pepper relish, egg yolk, and garlic croutes. 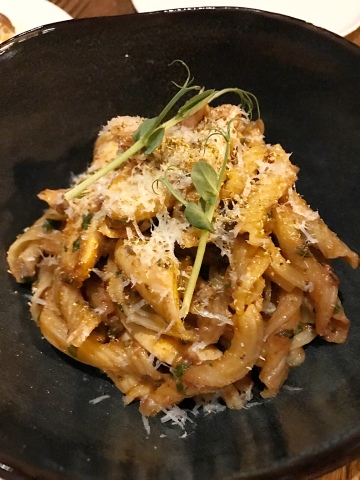 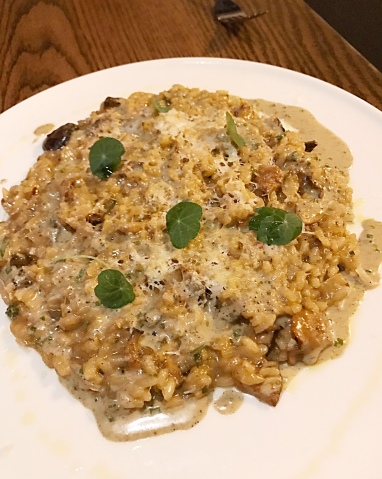 Next we sampled from the Pasta & Grains. What could be more rich a decadent then Garganelli pasta with red wine braised octopus, house lamb merguez salad, and fennel pollen or Mushroom Risotto with grana padana. Although many Italian restaurants offer risotto on the menu, it is rare that we are as pleased and impressed as we were with this dish.

For something more substantial we tried the Hanger Steak with creamed greens, veal reduction, new potatoes, creme fraiche, trout roe, and black garlic from the Daily Essentials. Our server suggested the Hand Cut Fries with kenneback potatoes, fried leeks, bottarga, topped with shaved ancient gouda and a side of smoked mayonnaise. Boy are we glad she did! These are truly the grown-up version of french fries, thick cut perfectly soft inside and crispy on the outside. If you’re used to an aioli for dipping, the smoked mayo was very unique and delicious. 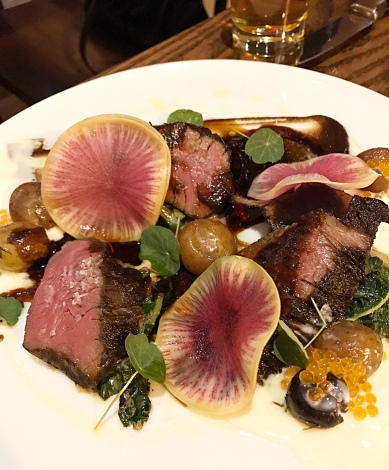 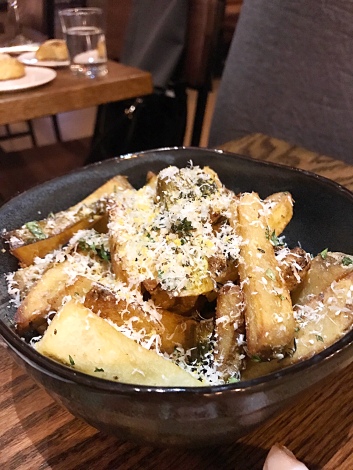 When it came to the dessert course, we were truly touched on an emotional level as the menu reads:

Marini writes: “Sometimes, it’s not about a restaurant. Often, as a chef, I’m asked too many questions about the dish I’m proudest of. This dessert menu is what I am most proud of now. The reason? Steven Marini, my son, who is my most treasured accomplishment…He is also a child diagnosed with high functioning autism.

Steven has a story and he wants to share it. He and I have created this menu as a way for him to be part of rarest. in his own way. It’s not high art, but it is damn good. I love him for wanting to do this and I just watch some incredible wheels turn as I go on this journey being his dad. I hope you enjoy it. “ 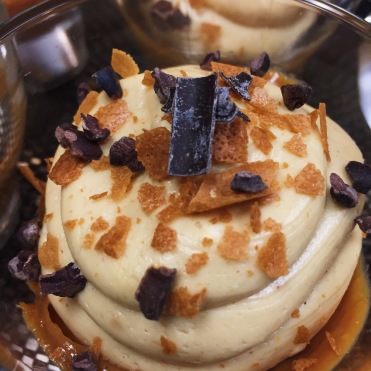 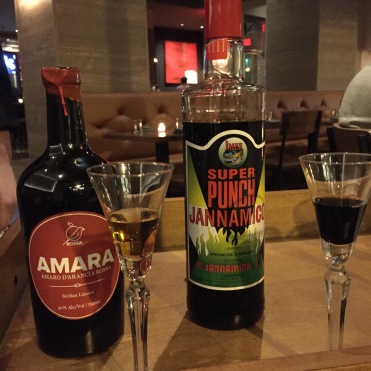 Don’t forget the rarest Amaro and after dinner drink cart. Alexandra Cherniavsky is the general manager, and prior worked as wine director for Avance’s cellars, as well as managing Jose Garces’s Amada in Old City. Her beverage collection is described as “interesting to novices and interesting to experts.” The 80+ bottle list spans the globe, with a slight focus on bubbles—something she thinks would match Marini’s cooking. On tap: five craft beers and a Vieux Carré cocktail. Kevin Lopez heads up the ingredient-driven cocktail program.

Stop by Monday- Friday to sample some libations during happy hour offering $2 off draft beer, $2 off Amaro, $8 Poor Richard’s Punch, $8 cocktail of the day, and $7 select red or white wine. Look for a lunch menu coming soon! Reservations can be made via OpenTable. Restaurant capacity is 75 in the dining room and 20 seats at the bar. If you are interested in hosting a private event, you can email theteam@rarestphilly.com for more information.