Last night we stopped by Brauhaus Schmitz’s 23rd Street Armory Oktoberfest! Little did we know, we had stepped into a perfect version of the true German festvities. The 16,000 square-foot 23rd Street Armory (22 S. 23rd St.) has been totally transformed into the likeness of a Munich festival tent for the first annual 23rd Street Armory Oktoberfest for October 7-9, 2016. Decked out with Bavarian blue and white ceilings, authentic festival tables and benches imported from Germany plus a lofted stage area for musical acts like the Grammy-nominated Alex Meixner Band. Traditional food provided by Chef Jeremy Nolen and beer will be provided by the famous Hofbräuhaus will be served.

Tickets are available for each of the five sessions for $45 general admission, or $65 VIP. 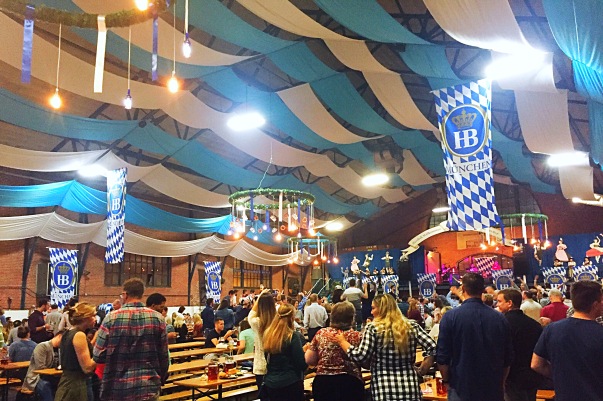 “We have seven years of experience from South Street Oktoberfest in hosting tens of thousands of guests for the city’s most well-known celebration,” said Brauhaus owner Doug Hager. “We reach capacity every year and had no room to grow our South Street event. We also wanted to challenge ourselves by creating a brand-new, three-day, truly unique experience. We will transform the Armory from top to bottom – and put on an even bigger and better show. With its 16,000 square feet and 30 foot ceilings the vision was clear the first time I walked into the space. We are also able to rent it a full week ahead of our event giving us ample time to decorate it as needed. The plan is to completely drape the ceiling like you would see in the tents in Munich. Authentic Oktoberfest tables and benches are already on hand to allow for us to set up each session with seating for 1500 guests.” 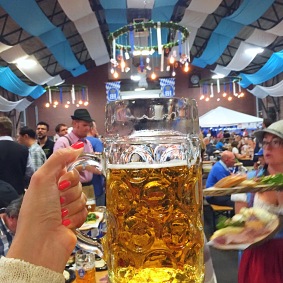 All General Admission tickets include: open seating on authentic imported festival benches, traditional Bavarian food, first liter of beer, glass 1L mass stein to take home and entertainment by the German Hungarian Dancers as well as a featured entertainer (listed above). VIP tickets for each session includes all of the above plus VIP quick entrance, reserved seating by the band and dance floor, table service, and brotzeit (meat and  cheese board) on table when you arrive.

Each session will also include a ceremonial Keg tapping with special honored guests. And one lucky person from the weekend will also have the chance to win an all expenses paid trip to Germany for Oktoberfest 2017, with proceeds benefiting Volunteers of America! Traditional Oktoberfest food will be provided by Chef Jeremy Nolen. We enjoyed Roast Pork, Bratwurst, Spicy Bratwusrt, sauerkraut and potato salad. Wash it all down with a world famous Hofbräuhaus beer.

“Upwards of 400 Kegs of beer will be shipped across the ocean from the World Famous Hofbrau Brewery in Munich,” added Hager. “Personally I’ve been to Oktoberfest in Munich 7 times and although we could never get anywhere close to re-creating that experience, we are going to try our hardest. Prost!” 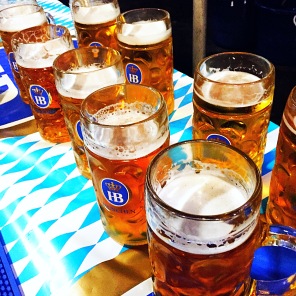 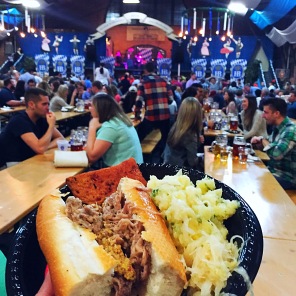 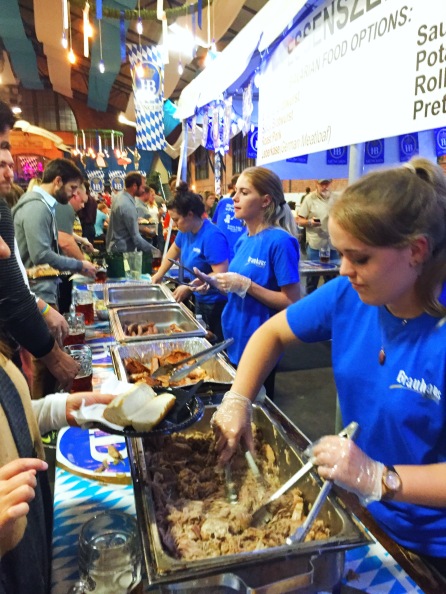 This year’s entertainment showcases Alex Meixner, a 2007 Grammy nominee. He has performed traditional ethnic music since he was 4 years old and has extensive experiences in a wide variety of musical genres (everything from classical to jazz to pop to world music from around the world!) His true passion lies in entertaining audiences…. he does this primarily with an international party mix of polka music. We truly loved his performance. 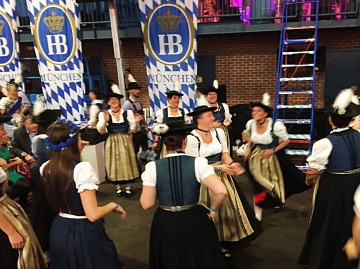 “Die Heimatklänge” Orchestra has been providing music to the German-American Community since 1955. Today’s band members  Bill, Fred, Joe, John, Wayne, and Dino  are the second generation in the musical tradition. With a true love of music of all varieties, Die Heimatklänge is at home in any venue. Their unique sound combines traditional waltzes and polkas, with some classic rock and roll and even a musical ballad or two. The band brings song and dance to German-American organizations and people up and down the east coast. In the Philadelphia area, having a good time with German music means “DieHeimatklänge!” Bavarski featuring Eddie Biegaj, Ron Oswanski, & Chuck Pendrak. A new brand of polkas — stay tuned! What do you get when you mix when you mix one of the hottest jazz organists with one of the most versatile drummers around and an opera singer? New York City’s newest Polka Sensation- BAVARSKI! Of course, these aren’t just any musicians putting on lederhosen.

So hurry up and get your tickets for Brauhaus Schmitz 23rd Street Armory Oktoberfest, this is a truly authentic celebration of German beer, food, music, and culture that you don’t want to miss!