This Sunday, February 5th Super Bowl 51 will be played in Houston, Texas as the New England Patriots will take on the Atlanta Falcons for the 2017 title. If you’re wondering where you can get all the action, we’ve got the scoop to spots all over Philadelphia!

4. Brauhaus Schmitz‘s party will feature an all-you-can-eat buffet for $25! Head to South Street for all your football favorite finger foods including a cheese tray, veggies and ranch dip, chips and roasted onion dip, pretzel sticks, buffalo and old bay garlic wings, bacon and cheese fries, sloppy joes, spicy Hungarian sausages with peppers and onions, and smoked cheddar mac and cheese. $4 select draft beers will be available and the party starts at 5:30 pm.

5. Zama and CoZara will both open early Sunday February 5th from 2:00 p.m. – 7:00 p.m. while featuring a special takeout item for at home Super Bowl gatherings.

“We know that most people tend to eat a lot on the evening of the Super Bowl, so we wanted to provide our diners with the opportunity to come in and enjoy a sensible, lighter meal before the game,” said Chef Zama.

Zama will be selling sushi trays for takeout for Super Bowl entertaining. The takeout sushi trays will feature ten maki rolls for $50, or pre-ordered for $45. The trays will also be available with a six-pack of Kirin or Sapporo Light for an additional $15 per six pack. The trays will be plated and ready for serving and will feature a variety of rolls including spicy tuna, spicy salmon, eel and avocado and California rolls. Each tray will come with a bag of accoutrements including low sodium soy sauce, wasabi, ginger and chopsticks.

CoZara will offer wing tray pre-orders for the Super Bowl. There will be six different types of wings on each tray including mango and mint, Tabasco mayo, Harakiri “super spicy”, honey black pepper, Korean chili, and Japanese five spice. All items served with pickled celery and carrots. Platters serve 10, 20, 30, 40, or 50 wings. There will also be a special of 120 wings for $75 that will include 20 wings of each flavor. 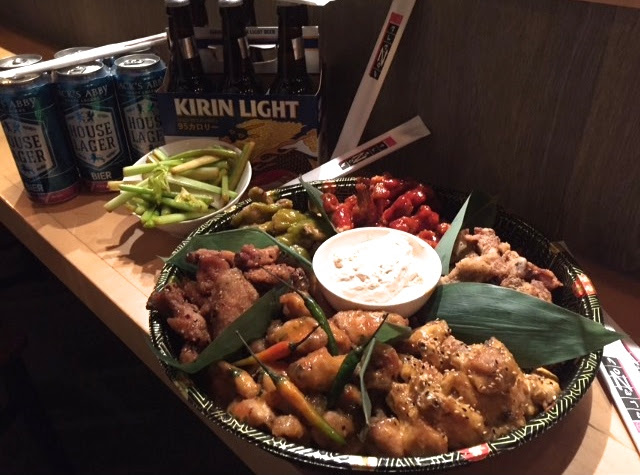 6. South Philadelphia’s Taproom on 19th hosts a Super Bowl viewing party with half price wings in four flavors: honey chiptole, garlic parmasean, buffalo and korean. Wash it all down with $3 Yuengling bottles, $3 Chesterfields, $10 pitchers, and $2.50 Millers Lite and High Life. Special menu items include Buffalo Fried Cauliflower and a selection of burgers.

7. Bridget Foy’s in Headhouse Square will be offering those who stop by to catch the game on at the bar,  buffalo wings for only $5.00 and Kenzinger drafts for $3.00 throughout the game.

10. SliCE for the first time ever, will offer wings on Super Bowl Sunday! Enjoy South Philly style “twice cooked” wings – first they are baked with salt and pepper, then they are deep fried and tossed in one of five sauces (Signature, Barbecue, Hot Sauce, Dry Rub, Gluten-Free). Stop by their locations in Rittenhouse or South Jersey to view the game. And don’t forget about the Super Bowl Sunday Pizza which is an upscale twist on the cheesesteak, with hand-tossed crust, topped with thinly sliced ribeye steak, green pepper and onion ribbons, gorgonzola cheese and house made steak sauce.

12. Revolution Taco has got take out tacos too! Make Your Own Taco Buffet available for take-out serves up to 5 people. Set-ups can also include utensils, wire chafing dish, sternos and even set-up service. Revolution Taco also is offering to-go burrito trays with assorted burritos and chips/salsa, mix and match your own protein selections with prices from $13.50-14.50 per person. Other Super Bowl specials include Buffalo Chicken Empanada tray with blue cheese dip or ranch dip. Email Carolyn@streetfoodphilly.com or call 215-205-8345 to order today. Suggested 24-48 hours notice suggested.