Want to sail away on the open water while dining in luxury? Well you can do it all at Moshulu without even missing a day of work. Talk about a “staycation.” Permanently docked at Penn’s Landing is the world’s oldest and largest square rigged sailing vessel still afloat. She is in fact the one and only restaurant venue on a Tall Ship today in the World.

Built by William Hamilton & Co., Port of Glasgow, Scotland in 1904 this “state-of-the-art” sailing ship was the finest and latest of man’s achievement for its time. She was equipped with 34 sails and began her colorful career carrying coal to Chilean ports (via Cape Horn) and returning to Hamburg, Germany with thousands of tons of nitrate. Later followed by voyages with coke and patent fuel to Santa Rosalia, Baha California, again returning with nitrate.

She began carrying coal in 1912 and was confiscated by the US Navy during World War I in 1917 as prize booty. At the time she was known as “Dreadnaught” meaning fearless. Later to be renamed “Moshulu” by Woodrow Wilson’s wife after the Senecan Indian expression meaning “One who Fears Nothing”.

Opening first as a restaurant in 1975, Moshulu closed later in 1989 after being damaged by a fire.  In 1994, HMS Ventures, Inc.; and Mrs. Dodo Hamilton of the Campbell’s Soup painstakingly restored the ship in Camden to her original glory. She was once again opened as a restaurant on the Delaware River in 1996, docked at Pier 34 on Philadelphia’s waterfront. 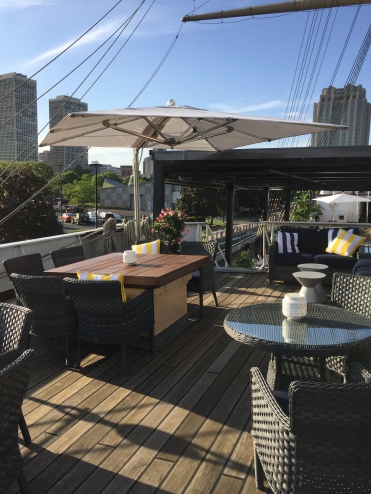 Moshulu was relocated to its current location in 2002 and opened again in May 2003 to gain recognition as an award winning, AAA 4 Diamond rated Restaurant, Bar and Deck. This season The Deck at Moshulu was opened as a more casual dining venue. We watched as excited patrons graced her deck for an opening party to welcome in the summer season. Guests clicked glasses filled with champagne, wine, and popsicles as new life was breathed into the ship.

The “it” cocktail of Summer 2017 is sure to be named Scarlet or Giselle. These sparkling wine drinks are accented with either St. Germaine or Cointreau and topped with a homemade fruit-infused popsicle. Other unique drink choices include Oh Ship! made with Bacardi Banana, Bacardi Coconut, Bailey’s, and Pina Colada served in a 24 oz Mug with discounted refills. Happy Hour is Monday-Friday 4:00-6:00 pm and features $5 beer, wine, and cocktails- our go to is the Pinarita made with Sauza Hornitos Plata Tequila, lime, agave, and pineapple.

Buckets of beer and “Deck Jugs” are also available for parties of 2-6+ filled with Red or White Sangria, Sunset Rose, or the Weekend Warrior cocktail. Be sure to browse the menu while you indulge in some drinks. Executive Chef Anthony Bonett has created a variety of dishes with casual approach and high-quality ingredients. There is an extensive seafood selection, as well as sushi. Our favorite rolls include the Lobster & Unagi Roll with avocado, mushroom, and soy reduction or the Pressed Tuna with spicy tuna, tuna sashimi, avocado, and spicy mayo. 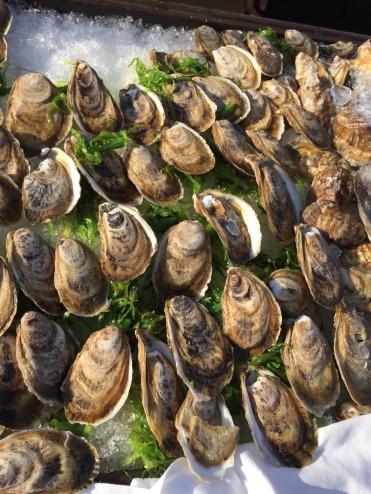 Don’t be afraid to put in a full order for dinner as you take in the spectacular views of the Delaware River and Ben Franklin Bridge. For our main course we sampled the Crab Cake Sandwich with lettuce, tomato, chipotle aioli with a side of potato chips, as well as the Surf Turf Wedge Salad topped with sliced steak, shrimp, blue cheese crumbles, bacon, tomatoes, and blue cheese dressing over iceberg lettuce. 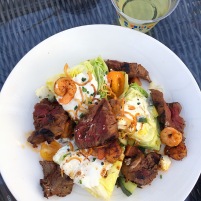 And be sure not to overlook the desserts. Pastry Chef Sandy Valentine has inventively crafted some sweets that are truly out of this world and very Instagram-worthy. We had the Philadelphia-authentic Chocolate Tasty Shake topped with chocolate ganache, Philly candies, Philly Soft Pretzel, Peanut Butter Tasty Cakes and whipped cream! As if one was not enough, we also ordered the Wild Thang Strawberry Shake finished off with vanilla buttercream, pastel candies, a slice of birthday cake (its okay its not your birthday) and whipped cream. 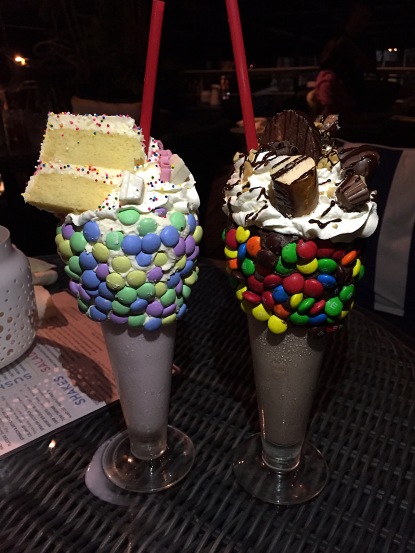 These treats will make you feel just like a kid again! Try the more adult milkshake version by adding Frangelico and Vanilla Vodka. Well what are you waiting for? Reservations for Moshulu are available via OpenTable and The Deck is first come first serve seating. Both spaces are available for private events.