It was with a flask of lightening and gust of wind that Lo Spiedo transformed in record-breaking speed into Bar Amis which celebrated with a block party earlier this month. Navy Yard welcomed Marc Vetri’s restaurant group newest concept with a block party for the casual offshoot of Amis, its stylish Washington Square West Roman trattoria. You can even find the Executive Chef Brad Spence running the kitchen at both Amis and Bar Amis! We stopped by for an exclusive Rye Whiskey Tasting Dinner with Dad’s Hat Whiskey Rye Whiskey. 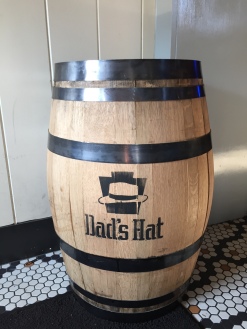 The evening was staged around Jeff Benjamin and local food writer and drinks guru, Danya Henninger, having worked with Dad’s Hat Rye Whiskey to produce their own special rye barrel blend. These unique whiskeys were served to guests at the intimate dinner featuring a special menu paired with 4 courses of competing cocktails featuring the two blends. Guests sampled blindly, selecting their favorite from each round. In the end, the most popular cocktail was added to the permanent menu! Jeff’s rye blend seemed to win the crowd over, but it was a close call with a variety of unique cocktails created for each course.

We tried each rye whiskey neat, before starting the meal. Then our first course consisted on Baked Pecorino with Hazelnut Honey Toast and Fresh Ricotta  and Amarena Cherry Toast, both served on homemade Rye bread. The cocktail pairing for this course was an old-fashioned inspired, Keystone State with brandy, chery, stone fruit bitters and Jeff’s Rye. Danya’s rye was used in the DH Cherry made with Cherry Heering and Ramazotti amaro.

The second course was much lighter with both food and drinks. We were served a Romaine and Escarole Salad with Apple, Radish, and Cider-whiskey Dressing. The Friends in Rye Places was a play on a whiskey sour, made with house apple shrub, Dad’s Hat barrel-aged maple syrup, lemon, and Jeff’s Rye. Danya’s blend was used in a drink called Brothers in Revolution, with Laird’s apple brandy, cider, and fresh apple. By the second course I was already falling very much in favor of Jeff’s Rye Whiskey. It had strong fruit flavor and also a peppery hot finish. Danya’s Rye Whiskey was much more subtle and mellow. Great to drink neat, but its taste got a bit lost in the more intricate cocktails.

The third course was our entrees of Rye Bucatini with Pancetta and Mussels in IPA-Ginger Beer Broth with Rye Toast. The mussels were so good, they vanished almost instantly. The homemade rye pasta was a very clever dish created for the evening. Drink pairings for this course included Jeff’s Home Field Advantage with house ginger beer, and orange. Danya got crafty with her The Hard Truth blended with Yards IPA and ice.

Last but not least, for the fourth course- Dessert. We tried a Whiskey-soaked Financier Cake with Bergamot-Whiskey Caramel. This dish was very similar to a dense almond bread, but made with pistachios. The most cocktail of the evening, later voted to join the regular cocktail menu at Bar Amis, was The Process. Jeff’s rye was used in this drink with barrel-aged Carpano Antica and blood orange bitters. Danya’s last cocktail was The Local Cooper made with orange-infused barrel-finished Bluecoat Gin and simple syrup. 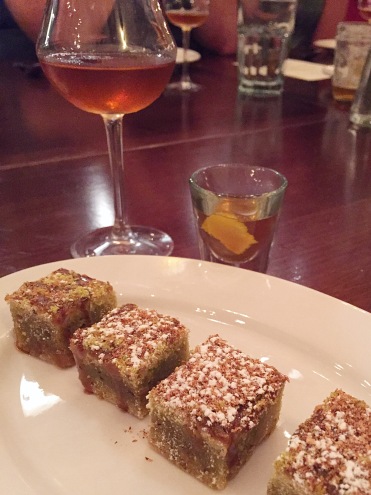 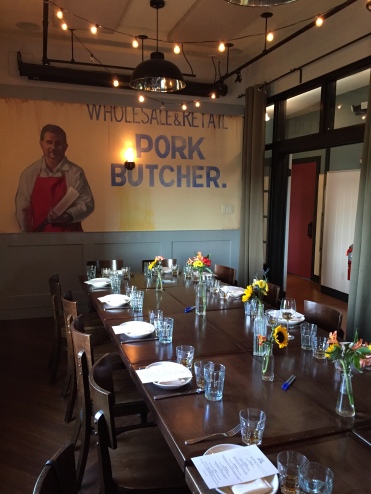 “The atmosphere at Amis is casual, fun, energetic — I always thought it would make for a cool bar,” Spence says. “People sit at the bar at Amis and order little bites. It’s already a unique part of the Amis experience and I wanted to try to do that on its own, in a larger format.”

Like at Amis, the regular menu at Bar Amis is a mix of small plates and entrees in the style of Italian homecooking. But Bar Amis puts a modern, approachable twist on dishes like Sal’s Old School Meatballs which are served on a sandwich. Guests can even enjoy the classic “cacio e pepe” comes both in a pasta version and as french fries.  The menu has got everything from kale Caesar salad to bucatini with almonds and peppers, and bigger dishes, like the parmesan fried pork chop with San Marzano tomatoes and stracciatella.  Their weekday happy hour includes cocktails from Vetri Family beverage director Steve Wildy. A large part of the menu is devoted to the “snacks” section: bruschettas, veggie plates like fried cauliflower, chicken wings with Calabrian chili sauce, nachos with cannellini beans and avocado, spicy steamed mussels.

Bar Amis is open for lunch and dinner. Reservations can be made via OpenTable.